Raise Your Glass of Orange Juice for a True Genius

The word “genius” is one of those labels – much like the word “hero” – that’s thrown around far too frivolously in today’s society, whether we’re discussing business, science, sports, music, acting, art, fashion or cooking.

Webster’s Dictionary defines genius as “extraordinary intellectual power especially as manifested in creative activity,” or “a person endowed with transcendent mental superiority; specifically, a person with a very high IQ.”

This post is dedicated to a person who exemplifies the true definition of genius as provided by Mr. Webster. You get extra points if you can figure out who this genius is without skipping to the end.

This genius spent most of his 93 years as a chemist, biochemist, author, educator and peace activist, and was named one of the 20 greatest scientists who ever lived by New Scientist magazine. He is credited as the founder of molecular biology and molecular medicine, and his discoveries in the world of science and nutrition are legendary.

In a nutshell, this genius basically wrote your high school and college curriculum for chemistry, physics and molecular biology.

This genius is perhaps best known for taking the world by storm when his controversial book Vitamin C and the Common Cold was published in 1970. He was considered “non-creditable” by many in the scientific research and medical community after his research was published. Some said he was crazy.

However, the work of this genius is the main reason why most of us now know that Vitamin C can help prevent the onset and duration of the common cold, and has cancer fighting properties.

This genius also happens to be a major hero of mine, and a major reason why I decided to devote my life to non-traditional healthcare more than 20 years ago. Yet, when he died in 1994, most people didn’t know who he was, and it barely made news reports. 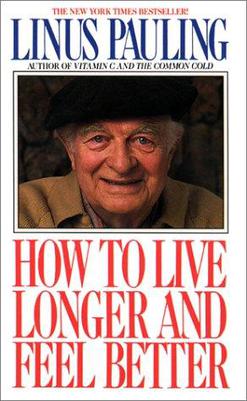 Today, I ask that you join me in lifting a glass of orange juice in honor of Dr. Linus Pauling, with the hope that I may make more people aware of his life, research and contributions to creating a healthier society.

We’re now approximately halfway through the year of the family. As we continue to take steps to take back our health, let’s remember who the true geniuses and heroes are – the people who are true role models for us and our children.

Also, let’s make sure we’re setting a good example by making smart decisions that will help us feel better, function better and live longer. Maybe your son or daughter will be the next Dr. Pauling!