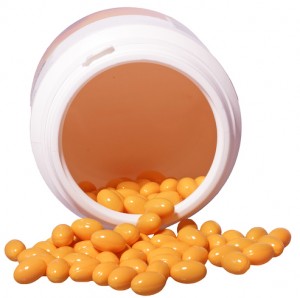 CoEnzyme Q10, commonly called CoQ10, a substance produced naturally in almost every cell in the human body, has two primary roles – energy producer and antioxidant. CoQ10 is active in the mitochondria, the part of the cell responsible for energy production.

Found in oily fish like salmon and tuna, organ meats like liver and kidney, and whole grains, CoQ10 is a very popular nutritional supplement for its energy producing and antioxidant functions.

The levels of CoQ10 in the body decrease steadily as we age, leading many scientists to believe that replacement of this dwindling CoQ10 supply through supplementation may make an anti-aging plan more effective.

When it comes to having more energy, we think about being able to keep up with our kids and grandkids, playing a round of golf, doing yard work, or carrying groceries into the house from the car.

On a much more basic level, CoQ10 helps with critical functions in our cells, like absorbing nutrients, converting food into energy, repairing DNA and getting rid of toxins. A lack of cellular energy means less than optimal cell function, which can lead to health problems.

For example, in people with congestive heart failure, the heart muscle can’t pump strongly enough, so blood begins to collect within the heart instead of being pumped throughout the body. Research suggests that CoQ10 can produce more energy in the muscle cells of the heart, improving the pumping output.

One clinical study found that heart attack victims who took daily CoQ10 supplements within three days of the attack reduced the risk of a future heart attack and chest pain. It also reduced their risk of dying as a result of heart disease compared to those who didn’t take CoQ10.

Like other antioxidants, CoQ10 fights “free radicals,” which damage cell membranes, disrupt DNA and even kill cells. Think of a free radical as a spark that flies out of a fireplace and damages the floor, which represents our bodies. Antioxidants like CoQ10, on the other hand, play the role of a screen in front of the fireplace, preventing the free radicals from doing harm.

Studies show that CoQ10 can help those with neurodegenerative conditions, like Parkinson’s disease and muscular distrophy. Research hasn’t proven exactly why patients improve with the addition of CoQ10, but the most likely reason is a combination of its antioxidant properties protecting brain cells from oxidative damage, as well as its energy boosting function, which enhances overall brain cell function.

The Effect of Statins on CoQ10

Statin medications – like Lipitor, Lescol, Mevacor, Zocor, Pravachol, Livalo and Crestor – are most commonly taken to reduce cholesterol levels. They also drastically reduce the levels of CoQ10 in your body. This explains why a common side effect of statin medication is fatigue, possibly caused by the cells’ inability to produce adequate energy.

If you are one of the millions of Americans taking a statin medication, you may want to ask your doctor about adding a CoQ10 supplement.

Because CoQ10 works on such a basic, fundamental level in our bodies, the potential benefits are many. Heart and brain function, blood pressure, blood vessel function, diabetes, cancer and even gum disease may be helped with CoQ10, although research is ongoing. Like any supplement, please consult your doctor or come see us before taking CoQ10.

This is the year of the family. One way we can take back our health is to educate ourselves about different things we can do to feel better, function better and live longer. Find out about supplements like CoQ10. Ask your doctor a lot of questions, and feel free to schedule a consultation at Natural Healthcare Center. That’s what we’re here for.

Do you have any questions about CoEnzyme Q10, or CoQ10? Join in the conversation on our Facebook page.