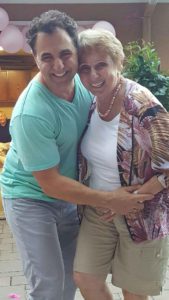 As the youngest of four children, I always had a special relationship with my mom. She taught me at a young age the value of honesty, hard work, commitment and caring for others. She was also the primary voice who encouraged me to follow my dreams and pursue my passion. You see, I had a lot of dreams and passion!

We had a similar conversation years later, but the stakes were much higher. Let me explain.

I always knew I would end up in private practice. After nine years of work, I decided to buy a building and practice. At the time, my wife was pregnant with our third child and we had just moved into a fixer upper with two small daughters.

The opportunity presented to me in March of 2003 was the purchase of 10 West End Court in Long Branch and Atlantic Chiropractic Center. I was about to go heavily into debt. If Natural Healthcare Center failed, my family would be without a home because the bank used my house for collateral.

Without hesitation, my mom took out a second mortgage on her house and lent me enough money to put down a deposit on the building. The closing was July 9, 2003, and baby number three of five was born eight days later.

Not once did my mom ask about her investment. She was the loving silent partner who had unconditional faith in me.

I now see, clear as day, the principles, foundation and ethics instilled in me by my mother. It has nothing to do with money or material possessions. It has to do with the raw understanding between mother and son and the deep bond we possess. So much of what I’ve accomplished in my life has been because of my mom, who was and continues to be a pillar of gentle strength.

Many people know that I’m very proud of my Armenian heritage. My mother and father were both born in America after the Armenian Genocide, a horrific and woefully overlooked event in history that occurred during the early 20th century.

From humble beginnings, my mother grew up in Portland, ME and my father grew up in Union City, NJ. They actually met in Asbury Park at an Armenian dance in the early 1950s. They were married for more than 50 years before my father passed.

My mother has always been a shining example of the simplicity of life, proving that you don’t need to have much in the way of material things to make an impact. She never has to try to be the most special person in the room. She just is. That’s why everyone loves her.

We’re celebrating family this month at Natural Healthcare Center, and I wanted to take this opportunity to wish my mother a Happy 80th Birthday. As a father of five, my greatest wish is to have the same impact on my kids’ lives as my mother continues to have on mine. Without her, Natural Healthcare Center would have been nothing more than a dream. Her faith in me was the fuel that kept me going during those early years.

I encourage everyone to take a few minutes to reflect upon what family means to you. Remember how important it is to have someone in your life – a parent, sibling, grandparent, aunt, uncle, cousin or friend – who loves you unconditionally and looks out for your best interests.

Spend time with them. Support them. Thank them.