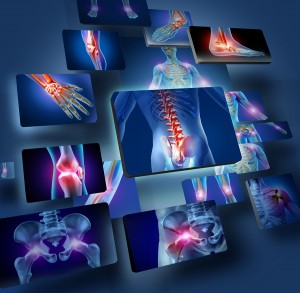 According to the Centers for Disease Control and Prevention (CDC), approximately one out of five adults American adults have been diagnosed with arthritis. By 2030, this percentage is expected to jump to two out of three adults as our nation’s population ages.

The word arthritis has a very literal definition. It combines the Greek word for joint (arthron) with the Latin word for inflammation (itis). General symptoms of arthritis, or joint inflammation, include redness, swelling, pain, heat and stiffness.

Arthritis isn’t just one disease. More than 100 medical conditions are classified as arthritis.

The most common form of arthritis is osteoarthritis. This is the “wear and tear” arthritis developed by most people over 50 as cartilage breaks down.

Osteoarthritis is usually found in the hands, knees, hips or spine, although it can occur in any joint. Common causes of osteoarthritis include obesity, injury, an inflammatory diet, genetics and repetitive use of a joint over a long period of time, often from a physically strenuous job.

Most other forms of arthritis fall into the category of autoimmune arthritis. These types of arthritis occur when the body’s immune system attacks healthy cells instead of infection or disease, leading to inflammation in the joints.

Rheumatoid arthritis is commonly found in the wrists, hands and knees on both sides of the body and is more prevalent in women. While it often strikes first in middle age, it can also affect younger people, including children (juvenile rheumatoid arthritis).

In addition to affecting the joints, rheumatoid arthritis can affect the eyes, mouth, lungs, heart and other parts of the body. Scientists haven’t been able to identify causes of rheumatoid arthritis, although genetics, environmental lifestyle and hormones are believed to play a role in triggering the condition.

Other common forms of autoimmune arthritis include:

While we can’t control certain factors that contribute to arthritis, we can certainly reduce the amount of inflammation in our bodies.

Suppose I had a swollen ankle and jumped off a table 15 times, landing on that swollen ankle each time. You would think I’m crazy. And you’d be right.

Suppose you have inflammation in one or more joints. If you continue to eat inflammatory foods, which represent 90 percent of the Standard American Diet, and live an inflammatory lifestyle without enough exercise and too much stress, you’re basically jumping off a table 15 times and landing on your swollen ankle.

That’s just as crazy. Just like any disease or disorder, we can reduce the risk or severity of many forms of arthritis by simply making better decisions each and every day.

In future blog posts, we’ll discuss different forms of arthritis, symptoms and treatment options. If you would like me to cover a specific topic related to arthritis, please comment here or email me privately at jproodian@naturalhc.com.