Ashley, age 16, is an elite, Level 10 gymnast who aspires to compete internationally. She had been seeing Dr. James Proodian at Natural Healthcare Center (NHC) for about five years to treat various injuries and receive chiropractic care for ongoing maintenance.

For several months, she had been experiencing muscle burning and fatigue from simple, everyday activities. She had also been diagnosed with anxiety and obsessive-compulsive disorder (OCD) at an early age and felt like these conditions were getting worse.

“When I walked up stairs, I felt like I had just run a marathon,” Ashley said. “It was that kind of exercise-induced burning. After brushing my hair, I felt like I had done 20 pullups. It was like my muscles were failing me. I had trouble getting up in the morning and couldn’t get through the day without taking a nap, and I constantly had a pit in my stomach from my anxiety and OCD. I’m a straight A student and couldn’t pay attention in school. My mind was all over the place and I couldn’t digest any of my work.”

Ashley became very discouraged. She would see people doing normal things and teammates practicing gymnastics, making everything look so easy. They were having fun. They were enjoying simple things. Ashley was struggling just to live and started to feel hopeless, wondering if she would ever get back to normal.

“We Don’t Know What’s Wrong with You.”

Ashley started seeing different specialists, including a rheumatologist, endocrinologist, and a neurologist.

“They would take blood and say they can’t figure out what’s wrong,” Ashley said. “They would tell me to just try some PT. I was like, ‘You don’t understand. I’m struggling to make it through the day without crashing and burning.’ I was basically hopeless because my whole life was deteriorating. I was afraid I would end up sitting at home doing nothing.”

When Ashley’s condition worsened and she had to stop gymnastics, she decided to say something to Dr. Proodian during her next chiropractic visit.

Ashley had been seeing a nutritionist outside of NHC who had recommended dietary changes and an iron supplement. Dr. Proodian was troubled by the high iron dosage and dietary recommendations and immediately referred Ashley to Dr. Oscar Coetzee, PhD, DCN, Director of Clinical Nutrition at NHC, and Tina Hinchman, MS, MBA, CHC, CPT.

Ashley was not optimistic. She didn’t understand how a clinical nutritionist – and eating different types of food – could possibly fix the problems she was experiencing.

“I thought they would just tell me to eat more fruits and vegetables,” Ashley laughed.

The NHC team recommended blood tests and functional tests, using a process of elimination to get to the root cause of Ashley’s struggles. In addition to ruling out medical causes, functional testing would review potential gut microbiome imbalances, neurotransmitter imbalances, and Ashley’s metabolic pathways and nutrient needs.

Blood testing revealed a positive antinuclear antibodies (ANA) test, which typically means you’re having an autoimmune reaction and the immune system is attacking your own tissue.

Functional testing started the process of connecting the dots between Ashley’s symptoms and the root causes of these issues. Testing showed imbalance and inflammation in the gut microbiome, suppressed immunity, hypoglycemia, an overgrowth of E. coli and autoimmune bacteria, low levels of several neurotransmitters, and low levels of key vitamins. These findings were consistent with Ashley’s symptoms

She had also been prescribed two rounds of Augmentin and prednisone for two bad sinus infections by another doctor, and those medications likely contributed to the imbalance in her immune system.

“My levels were so low that it was amazing I could function at all, mentally and physically,” Ashley said. 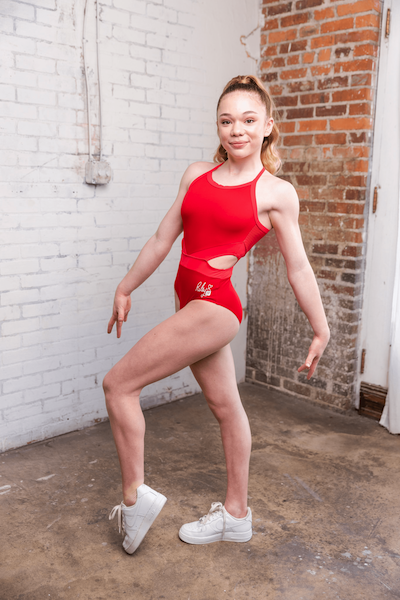 Ashley was seeing a neurologist when her mother, Stacey, received the email from NHC with results of her functional test. Ashley’s interaction with the neurologist during that appointment pushed her to her breaking point.

Ashley was asked to perform basic strength tests, like resisting the neurologist’s hand when pushed. The neurologist insisted that Ashley’s strength was fine, but Ashley tried to explain that her strength wasn’t near what it should be.

“I passed these basic strength tests, but I’m a gymnast and have been training since I was 9 years old,” Ashley said. “I used to be able to do 20 pullups and now I can barely do five. My strength had deteriorated. She said, ‘Well, I’m sorry you can’t do your pullups anymore, but your strength is fine and you can eat whatever you want.’ She was basically telling me I should just accept this as my new reality.”

After leaving the neurologist’s office rather abruptly, Stacey read the email from NHC about the functional test when they got into the car.

“We both started crying because we finally knew what was causing these problems and they could be treated,” Ashley said. “For the first time in a long time, I had hope that I could get back to feeling like myself.”

A Phased Approach to Rebalancing and Healing

Phase one of Ashley’s treatment plan was to rebalance her gut microbiome, reduce the amount of bad bacteria, reduce inflammation, and support immunity through rest, a supplementation regimen, and a whole foods diet with no processed foods or refined carbs. Ashley was told she would not feel well because the supplements would essentially work like an antibiotic and kill the overgrowth of bad bacteria, but naturally.

At the time of this writing, Ashley had just started phase two, which focuses on rebuilding her immune system and boosting her energy and activity level through continued supplementation and dietary changes. Ashley was recently given the green light to return to the gym for conditioning at a very measured pace with plenty of rest between workouts.

“The first time I went to see Dr. Coetzee, I couldn’t even make it up the stairs,” Ashley said. “I had to stop like five times and started crying hysterically. I went back a few days ago and flew up the stairs with no problem. I’m already noticing more energy and there’s no soreness whatsoever. I’m only five days into phase two and I’m feeling insanely better. It’s like night and day.”

The NHC clinical nutrition team checks in regularly with Ashley to find out how she’s feeling and monitor her progress. Functional testing every three months will show if certain levels are off so they can be rebalanced and maintained.

Phase three of her treatment plan will involve nutrigenomics functional testing, which is expected to provide insights into the root causes of Ashley’s anxiety, OCD, and the mental and emotional aspects of her struggles.

To this day, Ashley is amazed that NHC was able to get to the root cause of what she was experiencing and develop a treatment plan that makes a difference.

“People in my position just keep going to different doctors who tell them nothing is wrong and they just accept it,” Ashley said. “NHC has all these amazing resources to not only fix your problems but improve your life even if you’re not experiencing symptoms. They were able to find things that other doctors couldn’t find. I feel like I know so much more about my body and my health.”

To say the changes have been life-changing for Ashley would be an understatement.

“I just worked out for two hours,” Ashley said. “It’s exciting. Usually, I would fall asleep in the car on the way home from the gym but I feel great. I never knew that you could fix your life from the inside. You can treat the problems you have naturally and prevent illnesses from happening. Now I feel like I can reach my full potential.”

Ashley’s experience with NHC has even led to a career decision.

“I want to do what they do,” Ashley said. “I want to help people like me, not just athletes, but anybody who wants to feel better but can’t figure out what’s wrong. Everyone should be able to experience the life they want.”